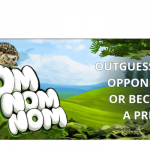 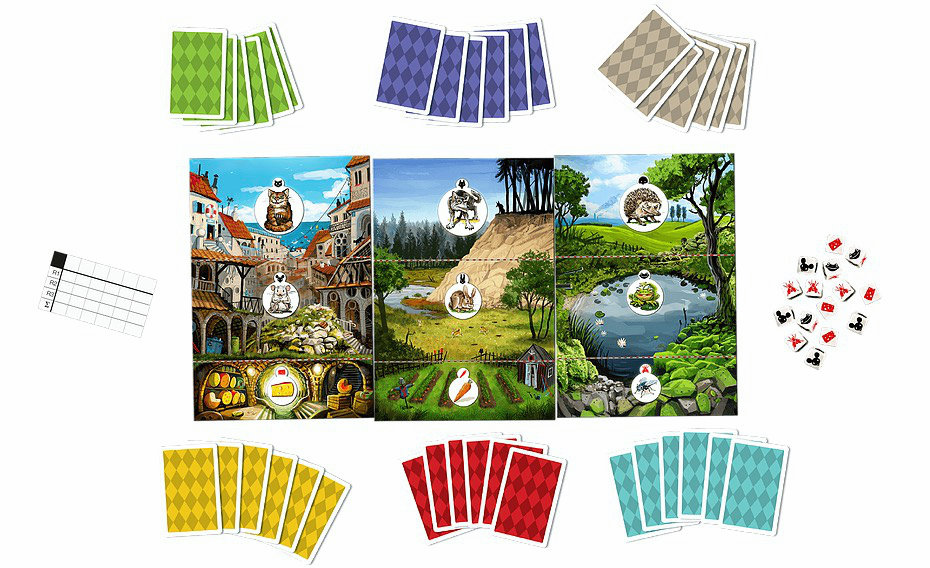 Om Nom Nom board game is a simply card/ dice game in which you try to guess the intentions of your opponents by being first to catch  prey and eat each others cards.

To play: Three boards are placed in the center of the table at the beginning of the game. The boards show a different set of animals/food in predatory order. Example: Cat/Mouse/Cheese.

Each player chooses a color and takes all 6 corresponding cards. The game consists of 3 rounds. Each round is divided into 4 phases.

At the start of a round, one player rolls all 15 dice that have the 6 foods on them (rabbit, carrot, mouse, cheese, frog, fly). Arrange them on the boards according to the type of symbol rolled. Place all the rabbits on the rabbit space, mice on the mice space and so on. 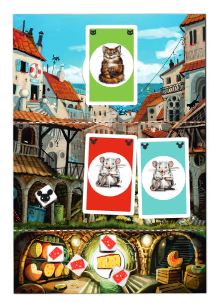 Each player picks a card from their hand and places it face down. Once all players have selected a card, they reveal their cards at the same time and place them on the corresponding places on the boards.

During this phase players try to capture as much prey as possible by playing their predator cards. Note that all dice showing red symbols (cheese, carrots and flies) are worth 2 points each, but all other prey — cards or dice showing black symbols (mouse, rabbit and frog) are worth 1 point each.

Players now collect prey from the level below their played predator. Each board is resolved one at a time, top to bottom. If anything is placed in the top level, it eats whatever is in the middle level. To eat a mouse you must play the cat card. If nothing is placed in the top level, everything in the middle level eats what is in the bottom level. Example mice will eat cheese.  Players playing an animal which has food below it share the food evenly 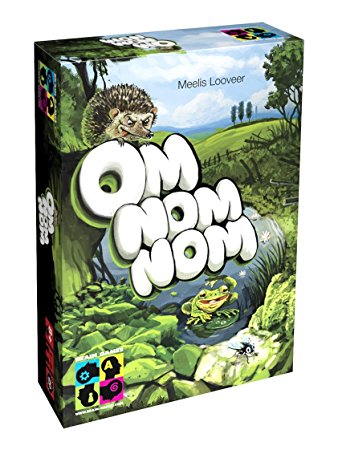 (discarding any that can not be shared evenly).

Hedgehogs will eat frogs, cats will eat mice and wolves will eat rabbits. Then if there are any remaining frogs, mice or rabbits they will eat the flies, cheese and carrots respectively. If the animal you played is not eaten by its predator you get to claim your card for your score pile.

If at least one card was played on the level above your card on the same board, your card gets captured (or discarded) and you lose it .(example- a mice gets captured by a cat).

Once players have played their 6 cards, each player scores points for the round: 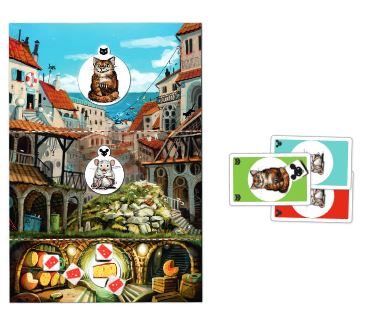 Trying to work out what other players will do is the core of the game. To be successful in the game, it is important to carefully track, which player has already used which cards.

Om Nom Nom board game comes with a printed scoring pad and pencil, which is a nice addition.

There is also a solo game option where you compete against imaginary opponents.  We haven’t played it solo, therefore I won’t bother commenting.

The Om Nom Nom tboard game takes about 20 min to play and may not be for everyone. It certainly was not one of my favorite. However, if you would like to check it out you can find it at http://www.publishing.brain-games.com. 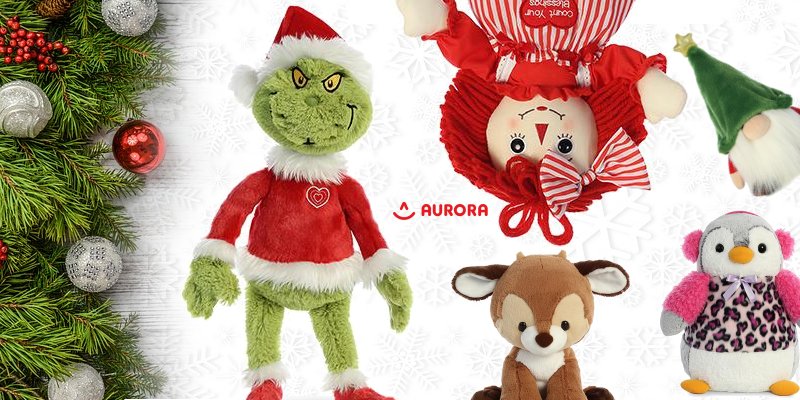