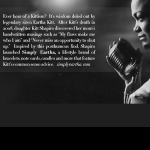 The Simply Eartha brand, established by Shapiro as a tribute to her mother and a sharing of empowering messages, started 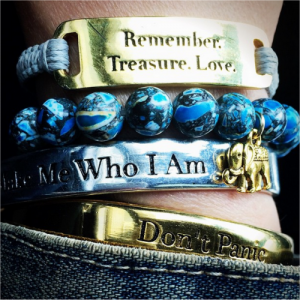 with the launch of home décor items that utilize the images, handwritings and wisdom of Eartha Kitt. The Simply Eartha jewelry continues the brand offering an environmentally friendly practice in producing 100% made in the U.S.A. products with personal connections.

The jewelry line, a collection of over 50 different styles of bracelets and necklaces,  (starting at $37) comes in corded or beaded varieties and sterling silver plated and 18k gold plated varieties. A full array of colors and styles are offered with and without Kittism sayings with dozens of selections available as adjustable bracelets, bangles, and dangling necklaces.

The sterling silver plated “My flaws make me who I am” reminds us that being happy with ourselves is about loving our flaws. 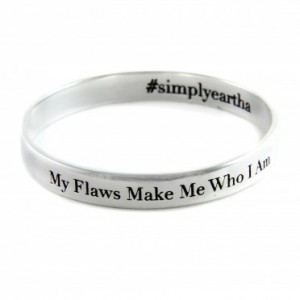 We all have flaws- little quirks, but why focus on those. We need to accept that nobody is perfect and embrace our insecurities. The beautiful bracelet’s message reminds us to embrace our uniqueness.

“Today you are you! That is truer than true! There is no one alive who is you-er than you!” – Dr. Seuss

The jewelry line would be perfect for anyone suffering from depression, mental illness or those that have an invisible illness.  I am gifting the “My flaws make me who I am” bracelet to my 25 year old daughter for Christmas. Not only does she live with a mental illness, but she is also living with a traumatic brain injury. I hope the bracelet will remind her to love herself as a brain injury survivor.

The Simply Eartha jewelry joins other organic and ‘green’ lines that include throws, pillows and blankets made of recycled cotton and soy candles in recycled glass jars. All Simply Eartha products use minimal and recycled materials for packaging and shipping.

About Simply Eartha™: Simply Eartha honors Eartha Kitt with products that have her artistic sensibility, using natural, recycled and uniquely crafted materials. The high style products are made in the U.S.A. and offer a real connection to the past with a modern appeal. Kitt Shapiro, daughter of the famous celebrity, is the founder of the Simply Eartha™ brand, a tribute to the lifestyle and life lessons her mother embodied.  For additional information visit www.simplyeartha.com and for the most up-to-date interactive activity about the brand, experience Simply Eartha™ on its social media outlets: Facebook, Twitter, Pinterest, Instagram and YouTube.

About Eartha Kitt: Eartha Kitt purred and pounced her way across Broadway stages, recording studios and movie and 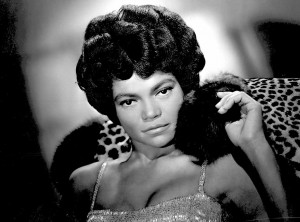 television screens in a career that lasted more than six decades. She was born Eartha Mae Kitt on a cotton plantation in South Carolina, on Jan. 17, 1927.  She was the illegitimate child of an African American/Cherokee mother and a white father about whom Ms. Kitt knew little. At eight years old she was sent to live in Harlem with her aunt. Her show-business break came on a lark, when a friend dared her to audition for the Katherine Dunham Dance Company. She passed the audition and permanently escaped the cycle of poverty and abuse that defined her life until then. She was among the first widely known African-American sex symbols and her signature highlight will always be her recording of “Santa Baby.” She was married to Bill McDonald, a real-estate developer, from 1960 to 1965 during which time, their daughter, Kitt, was born.  Her career has often been said to have had “nine lives.” Appropriately, she was tapped to play Catwoman in the 1960s TV series “Batman.” In 1978 she earned her first Tony nomination for her work in the Broadway show, “Timbuktu!” In 2000 she received her second Tony nomination, for best featured actress in a musical in “The Wild Party.” Her uniquely identifiable voice won her two Emmy Awards as outstanding performer in an animated program for her role as the scheming empress-wannabe villain, Yzma, in Disney’s “The Emperor’s New School.” Eartha was ahead of her time, living a ‘green’ lifestyle before it was chic.  She recycled everything and tended to her own organic fruit and vegetable gardens throughout her entire life. In addition, she maintained her signature voice and shapely physique through a personal fitness regimen which included daily running, weight training and stretching. She died on Christmas Day 2008 of colon cancer*, at the age of 81.

*Colon cancer is the second leading cancer killer in the U.S. It is the third most commonly diagnosed cancer in American men and women. 50,000 Americans die from colon cancer each year. 150,000 Americans will be diagnosed with colon cancer this year alone. Colon cancer often has no symptoms at all, which is why screening is so important.  Kitt Shapiro is a member of the Board of Directors of the Colon Cancer Alliance and commits to donate a portion of the Simply Eartha product sales to awareness for colon cancer screenings. “It is one of the most treatable cancers if it is caught early. Early detection can save your life,” Shapiro said.

One thought on “Simply Earth jewelry” 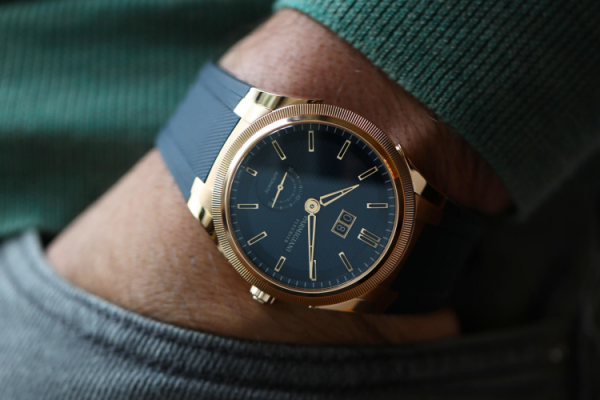