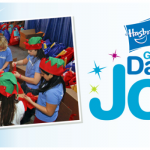 Today celebrates its 5th annual Global Day of Joy, during which Hasbro employees around the world spend the day spreading 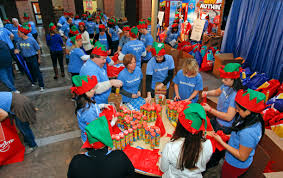 holiday cheer to children in need through volunteer projects, acts of kindness, and toy and game donations. During this holiday season alone, Hasbro is donating 1.5 million toys and games to organizations benefiting children worldwide, valued at more than $14 million. Many of those toys and games will be delivered today by Hasbro employees around the world.

From Rhode Island to France to Hong Kong, approximately 5,400 Hasbro employees are volunteering with roughly 250 organizations in more than 40 countries. By day’s end, that equates to more than 25,000 collective volunteer hours – more than two and a half years’ worth of volunteer service. This year, in addition to their volunteer projects, Hasbro employees are completing random acts of kindness as part of the company’s BE FEARLESS BE KIND signature philanthropic initiative.

“When we hosted our first Global Day of Joy five years ago, we couldn’t have imagined how impactful and how meaningful this would become,” said Brian Goldner, chairman and CEO, Hasbro, Inc. “Our employees rally together, rolling up our sleeves to make a real difference for children around the world. It’s a day that we look forward to all year round, and it has become how Hasbro celebrates the holiday season.”

In celebration of this year’s Global Day of Joy, hundreds of volunteer projects are taking place worldwide to spread kindness and joy, including:

“This is an incredibly special day for all of us and it builds on the work we do year-round to make a positive impact for children and families worldwide,” said Karen Davis, senior vice president, Global Philanthropy and Social Impact, Hasbro, Inc. “Service isn’t just something we do, it’s part of who we are.”

Beyond the holiday season, Hasbro has several year-round initiatives dedicated to creating a universe where every child experiences hope, kindness and joy.

In 2017, Hasbro ranked No. 1 on the 100 Best Corporate Citizens list by CR Magazine and was named to the Civic 50 list of Most Community Minded Companies for the fifth consecutive year.

Hasbro (NASDAQ: HAS) is a global play and entertainment company committed to Creating the World’s Best Play Experiences. From toys and games to television, movies, digital gaming and consumer products, Hasbro offers a variety of ways for audiences to experience its iconic brands, including NERF, MY LITTLE PONY, TRANSFORMERS, PLAY-DOH, MONOPOLY, LITTLEST PET SHOP and MAGIC: THE GATHERING, as well as premier partner brands. Through Hasbro Studios and its film labels, Allspark Pictures and Allspark Animation, the Company is building its brands globally through great storytelling and content on all screens. Hasbro is committed to making the world a better place for children and their families through corporate social responsibility and philanthropy. Hasbro ranked No. 1 on the 2017 100 Best Corporate Citizens list by CR Magazine, and has been named one of the World’s Most Ethical Companies® by Ethisphere Institute for the past six years. Learn more at www.hasbro.com, and follow us on Twitter (@Hasbro & @HasbroNews) and Instagram (@Hasbro).

One thought on “Hasbro Global Day of Joy”