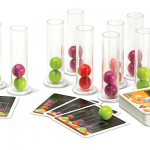 There is nothing I enjoy more than sitting down to a fun game night with my family. One daunting task I face when selecting a new game to play with the family is finding a game that is not only fun for the my husband and I, but also fun and easy enough to play with our eight year old daughter. These two children games are quite a bit of fun for children, as well as adults. 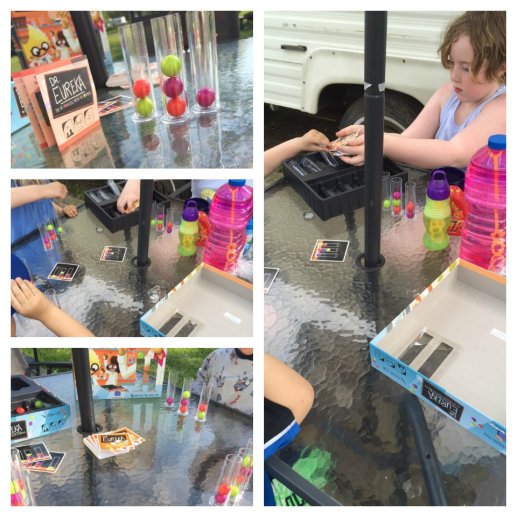 When I first heard about Dr. Eureka I was intrigue, as I have extensive background in the sciences, especially chemistry. While this is a children’s game, adults can have fun with the game as well.

Included with the game is 54 challenge cards, 24 balls (red, green and purple), 12 test tubes, and an illustrated rule book. This game is a fast paced game that not only tests your speed, but your problem solving abilities. I would classify Dr. Eureka as a speed dexterity puzzle game.

The player is not allowed to touch or drop any of the balls while transferring them from test tube to test tube. To be completely honest, this part can get pretty chaotic when played with a large group of children. On family game night, we were a little clumsy and some balls went rolling around. Once a ball is dropped or touched by a player, that player must wait until the next round to continue.

Once you complete the task on the card you yell EUREKA, and that player gets to keep that challenge card. If a player yells EUREKA and they have not completed the challenge correctly, they are also not eligible to win that round and must wait for the next challenge. The object of the game is to be the first player to win 5 challenge cards.

Flipping and rolling the balls is a great way of improving a child’s hand eye coordination. Also, in order to complete these challenges it is almost like a complex puzzle. Without the ability to just dump out all the balls and start from scratch, some strategy and planning is involved. ‘Dr.Eureka’ is a great game on so many levels, encouraging many of the building blocks in learning and problem solving. We thoroughly enjoyed this game and there were many laughs while playing.

The second game we had the pleasure of trying was a much calmer game called ‘Fast Flip,’ also from ‘Blue Orange’. This simple little game contains 54 cards and 10 tokens neatly kept in a small metal tin. 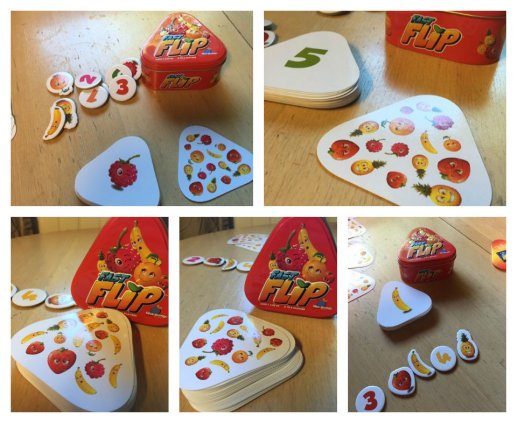 ‘Fast Flip’ is a fruit themed game of recognition. The cards are shuffled and placed down in a pile so that none of the fruit images are visible to the players.

The tops of the cards have either a picture of a single piece of fruit or a number. This game is actually played in a series of 3 games.

The first game starts by flipping the top card over to reveal a picture with various pieces of fruit. Beside that card sits the deck with either a fruit or a number exposed. If the top of the deck shows a fruit, the players race to count how many of that particular fruit is on the flipped card. If the top of the deck is a number the players race to see which fruit is pictured that amount of times of the flipped card. The first player to announce the correct answer scores that card as one point. This game continues until the end of the deck. One important rule though is that if you announce the wrong answer, you are now eliminated from that whole round.

Next is game 2! This game is a fast play for times that you may not have enough time to play through the entire deck. In this game the tokens are placed face up and within reach of all of the players. The general game is the same as in the first game but rather than announcing your answer you quickly grab the answer that is pictured on the token. These tokens though are still in play until someone wins this game entirely, which means you can steal another players token especially if they are close to winning the game. The first player to grab and keep 4 tokens, wins the game! This is a fast paced, cut throat competition, but- boy is it fun!

The third game is called ‘Token Line’. In this game all of the tokens are lined up in any random order. The game is played generally like the first two, but rather than matching up with the top card of the deck, you match with the furthest left token in the row. Whichever player calls out the correct fruit or number scores one point. The player to first reach ten points wins this game.

Although there are various games within this main game, each are similar with the rules of play and goal in order to win the game. ‘Fast Flip’ is is fast paced and quick thinking game. We had so much fun shouting out our answers and were thoroughly amused with the quirky pictures of the fruit.

Blue Orange Games are a great addition to our family game night, providing hours of fun and family bonding. The bright colours and fun pictures are a treat to play with. Both games are guaranteed to be both challenging and charming, and work the brains of players of all ages.

What family board games are your favorites? Do you have a Blue Orange board game your family loves to play? 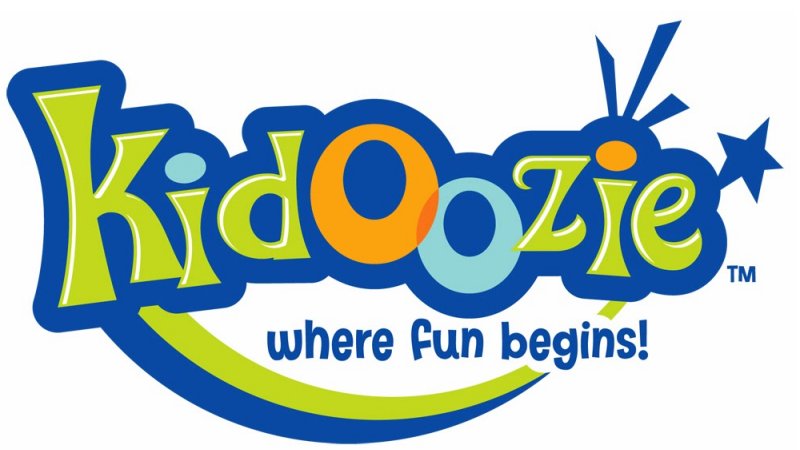 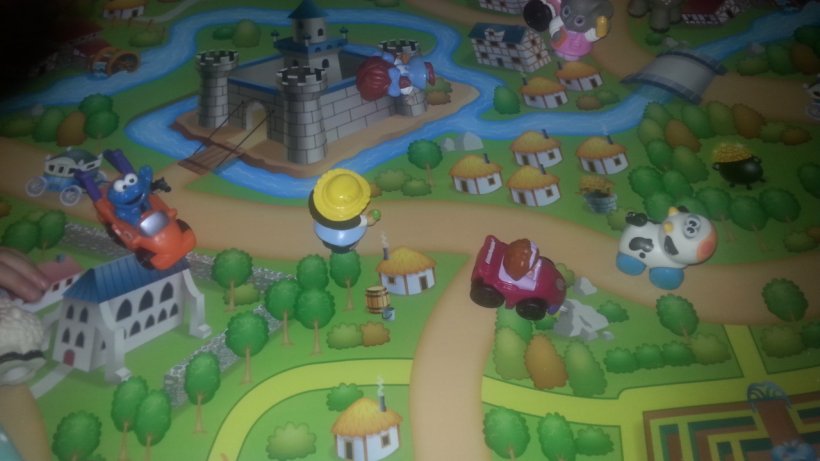