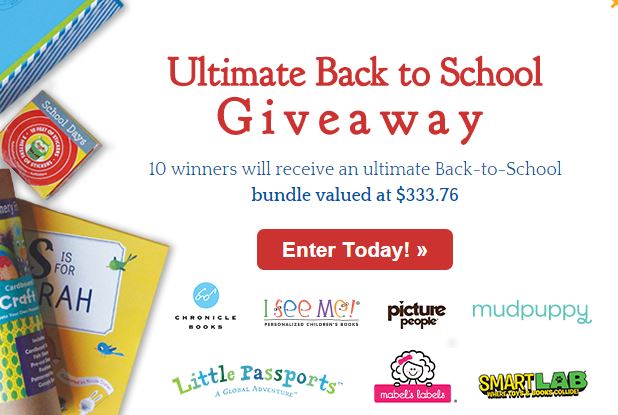 Over $3,300 in Prizes. 10 winners will receive an ultimate Back to School Bundle.

The Ultimate Back to School Giveaway presented by I See Me! LLC, Chronicle Books, Mudpuppy, Mabel’s Labels, SmartLab Toys, Picture People and Little Passports (the “ Promotion” is open to legal residents of the fifty (50) United States (including District of Columbia) who are eighteen (18) years or older at the time of entry. Void in Guam, Puerto Rico, the U.S. Virgin Islands, and other U.S. territories and possessions and where prohibited by law.

The Contest is also open to residents of Canada, excluding Quebec, who are over the age of majority in the province or territory in which they reside as at the start of the Contest Period.

Go to www.iseeme.com/sweepstakes and completely fill out the online entry form by providing the required information and submit the online form. Limit one entry per person, per email address during the Promotion Period.

One thought on “Ultimate Back-to-School Giveaway!”